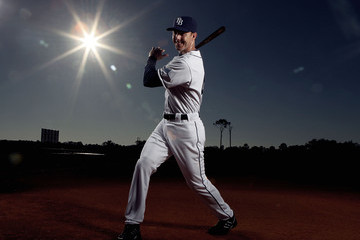 Christopher Robert Richard (born June 7, 1974 in San Diego, California) is a retired Major League Baseball outfielder and first baseman. Drafted by the St. Louis Cardinals in the 1995 June Amateur Draft, Richard made quite a debut with the Cardinals on July 17, 2000 when he became the 15th player in Major League History to hit the first pitch of his major league career for a home run.

Richard was traded to the Baltimore Orioles on July 29, 2000 and finished the year hitting .276 with 13 home runs and 36 RBIs in only 199 at bats. He tied an Orioles record with 13 total bases in a single game when he hit 2 home runs, a triple, and a double against Cleveland. In 2001, Richard led the Orioles in extra base hits while not making a single error playing right field, center field, and first base. 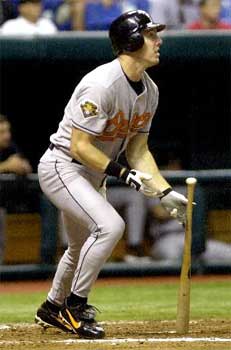 Shoulder problems over the next several years resulted in three surgeries and little playing time. In 2005, Richard signed with the Texas Rangers starting a run of 6 years in Triple‐A Baseball with three
teams (Oklahoma Red Hawks, Indianapolis Indians, and Durham Bulls). He made it back to the Majors in 2009 with the Tampa Bay Rays. That same year, he became the first International League player in 50 years to hit two grand slams in one game.

Following the 2010 season, Richard founded the Durham Baseball Academy providing lessons to aspiring youth baseball and softball players in North Carolina. Today, Chris is a successful entrepreneur in his hometown of San Diego, CA, running the family business, Personal Pitcher, and provides baseball instruction for the kids in his community.