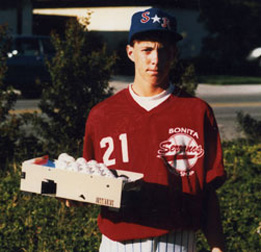 In 1988, 14-yr old Chris Richard begged his Dad to get him a pitching machine he could use in the backyard. He could never get enough batting practice, and being of small stature, he knew that in order to make the high school junior varsity team, he would have to make a good impression at the plate. The batting cages were inaccessible, and too expensive anyway, so dad began a search for a pitching machine.

After checking out every sporting goods store in San Diego, he concluded that there was nothing available, and the mail order advertisers only had heavy, expensive machines that would not fit into the backyard. Out of desperation, Dad started tinkering in the garage with some motors, batteries, some light weight rubber wheels and a third motor to feed balls. The ball he selected to use was the practice golf Wiffle® ball available in just about every sporting good store. It was inexpensive, lightweight and its small size made it tougher to hit than a baseball.

Finally, after many nights with hacksaws, screwdrivers and one black eye (those balls come out fast!), the first Personal Pitcher was ready and Chris used the heck out of it, sometimes hitting for 3 or more hours a day! Chris invented games with his friends (such as homerun derby) and played situational baseball that made practicing fun.

Well, Chris made the JV team and continued to improve every year. His senior season on the varsity team, Chris hit .440 with 3 home runs and only 3 strikeouts. Coupled with his very solid defensive play in center field Chris was named co-Player of the Year for his league and was a member of the 1992 1st Team All-Section Baseball Team for San Diego County. Chris was eventually awarded a scholarship to Oklahoma State in 1995 (after playing Junior College ball for 2 seasons). He hit .335 and finished 8th in the nation in RBI with 85. 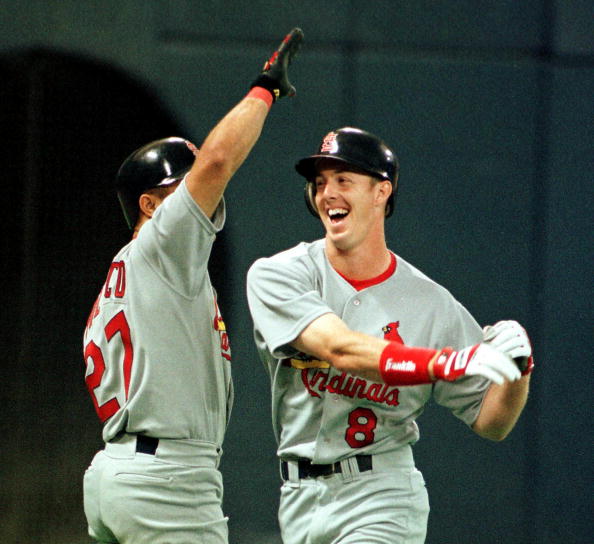 Chris was drafted by the St. Louis Cardinals in ’95 and played for the Single A team. For leading the team in homers, RBI, hits, walks and on-base percentage he was named MVP. He was named to the Florida State League All-Star Team in ’96, to the Cardinals 40-man Major League Roster in ’97, and in ’99, after missing a year recovering from shoulder surgery, Chris hit .298 with 30 home runs and 98 RBI split between AA and AAA. Chris led the Cardinal minor league organization in home runs and RBI. He was named First Team All-Texas League first baseman. Once again Chris was named to the Cardinals 40-man roster and hit his first major league pitch for a home run on July 17, 2000!

To read more about Chris’ career and where he is today, visit his bio page.